Distraction (French – distraction*)
From the Latin distractio, –onis: a pulling apart, separating.
1. absent-minded tendency or momentary lapse in concentration
2. action conveying a sort of inattention
3. act of being diverted or amused, of unwinding
4. an entertaining activity
* In French, the term has an additional meaning: embezzlement (literary).

Offshore finance pierces reality. It pierces holes in maps, accounts books, legislative texts, economic policies and public budgets. Financial flows gain momentum, funneling through these breaches. The currents produced by these financial movements are so powerful that they sweep away everything in their path, strictly benefiting very few. The holes in the complex network of national laws and bilateral agreements are many and longstanding, to the point of making offshore finance strangely familiar, natural and legitimate for us; and yet, fiddling with accounts and laws shifts attention far from the mechanics of financial fluids, preventing us from connecting the dots with the deteriorated living conditions of much of the population. Finance seems hopelessly disconnected from the level of everyday economic realities, perfectly abstract and elusive.

Offshore geography is extra-territorial, as its name indicates. This parallel planetary network is deployed via the production, commodification and financialization of privileges. Its ultimate beneficiaries hover above laws and borders, extracting themselves from the constraints of regulations, relieved of the weight of their responsibilities and from any sort of obligation to the commons. Extracting themselves just enough to dominate, subjugate and corrupt all the others, this offshore state is down-to-earth, to say the least. Offshore can also bury itself. Underground, it adopts the architectural form of luxury bunkers, freeports, crypts, numbered accounts or conduits, to remove, bury and accumulate wealth. It conceals itself via a multitude of proxies: anonymous mailboxes, representatives, consultants, dummy corporations, fictional companies and more; and behind a panoply of opaque or reflective screens, gleaming glass walls and one-way mirrors, upon which outside gazes ricochet and are deflected.

Our work on offshore finance began with the observation of this global archipelago of tax havens from space: the satellite Sentinel-2 has provided us with multispectral images, obstructed by a thick, dense cloud cover, of emblematic territories including the City of London, Delaware, the Caribbean, Switzerland and Luxembourg, Singapore, the Netherlands and Ireland.

We surveyed them in hopes of unlocking the secrets of offshore finance at its very international financial centers, capitals and districts dense in wealth and power. From these travels, we brought back a prototype, the Offshore Tour Operator, which seeks to reconnect everyday reality with the shifty reality of offshore finance, and to capture this.

Borrowing the idea of psychogeographical drift from the Situationists, the Offshore Tour Operator (OTO) is an audio guide using geolocation, a GPS loaded with the 785,000 addresses from the Offshore Leaks published by the ICIJ [https://offshoreleaks.icij.org], automatically directing its users’ urban wanderings toward one or the other of the addresses of these offshore identities, wherever they may be around the world. 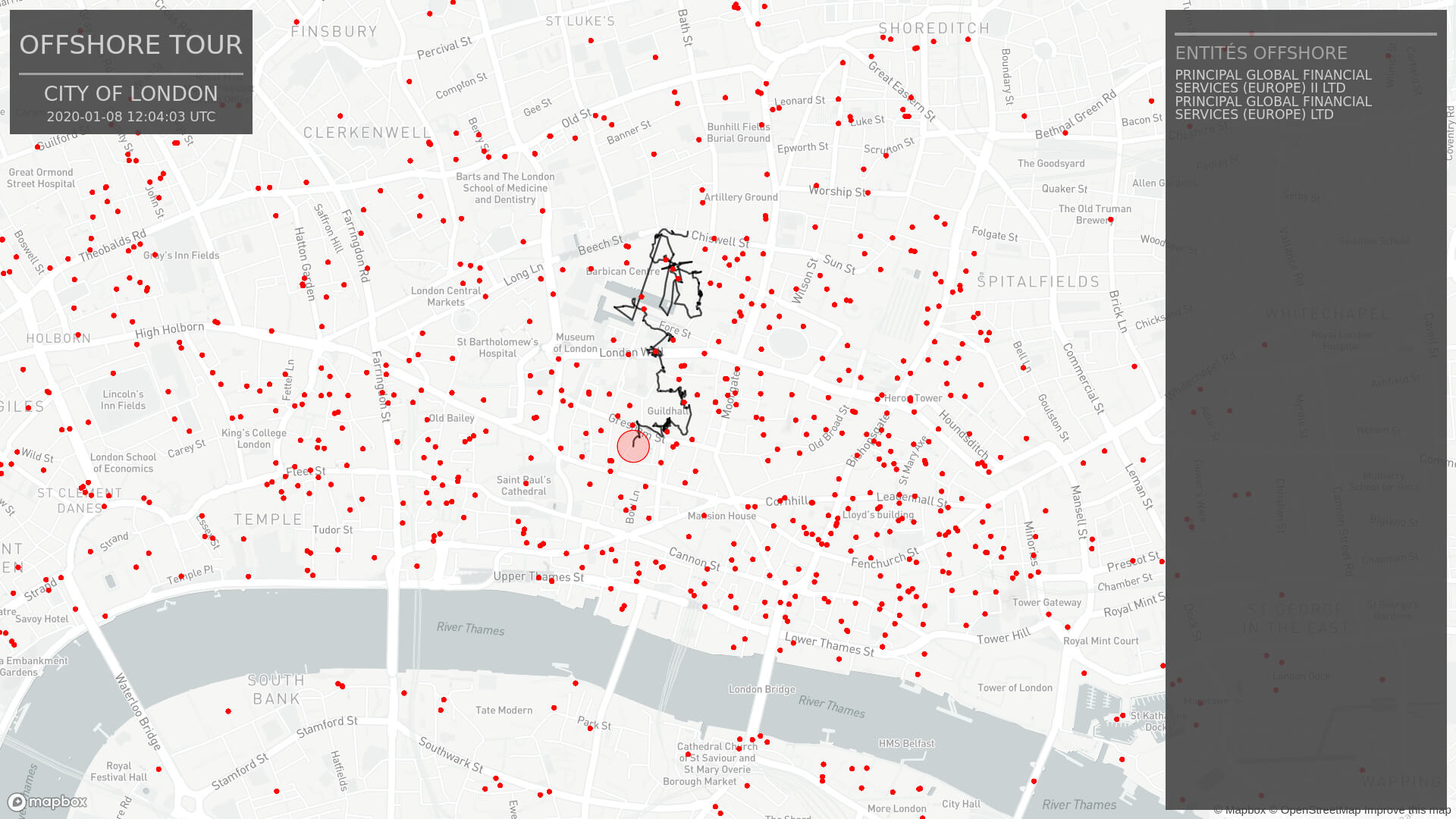 The Offshore Tours offer a foray into this parallel geography via local visit to a few of the actors pinpointed by the Leaks, more often the mere laborers of offshore finance, rather than its architects. Every location visited, every facade, every knot in the offshore network has been meticulously photographed. Behind each photographed facade hides a hot spot, a gap in the urban landscape connected to elsewhere, a true crossing point to offshore space. But because these addresses are deserted at the very moment of their unveiling, the tracking of offshore finance thus turns into ghost hunting.

Abstraction, distraction. Two artifices of high finance as opposed and interdependent as the two sides of the same coin. Isolating an element from its context to the point of detaching it from all reality or, on the contrary, drowning it in an overflow of information. The procedures seem antagonistic, but they all have the same objective: to make finance look like an exclusive preserve. It is important not to let the masses see the light.

It is amusing, to say the least, to note that the French dictionary places the words offshore and offuscation (Offuscation is the French for obfuscation) one after the other.

Offshore is the quality of extra-territoriality, it is to be far away, to be detached from the coasts, to be isolated from one’s native legal context. To be abstracted from it.

Obfuscation, on the contrary, is to be anchored in one’s context until one loses oneself in it, to multiply oneself to the point of disappearing, until one no longer attracts attention. But distracts it.

Originally, obfuscation is an astronomical term describing the phenomenon of clouds obscuring the sun. Moreover, financial mythology feeds on metaphors, each more colorful than the last, borrowing abundantly from the natural world—such as the names of animals with which its markets are qualified, or the water semantic field from which it borrows its flows and its liquidity…

We will thus be amused by a quotation from a work by Victor Hugo, The Man Who Laughs, 1869, centered on the theme of social misery and written during the author’s stay in Guernsey, a Channel Island and nowadays an offshore financial center as we know it: “I would be rich […] I could continue my calculations on solar obfuscation”. Aude Launay

This video is a dive into the cloudy satellite imagery, combined with five texts read in French by Jean-François Blanquet, taken from the collective book The Great Offshore (Paris, UV Éditions), the publication bringing RYBN’s artistic research on offshore finance to a close (French translations by Christophe Degoutin).